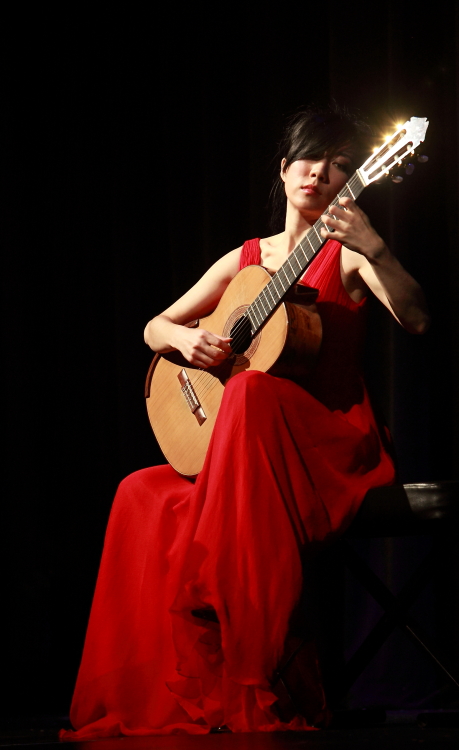 Born in Beijing, now based in the UK, Xuefei Yang (Fei) is acclaimed as one of the world’s finest classical guitarists.

Born following the Cultural Revolution, an era where Western music & instruments were banned, the fascinating story of Fei’s rise to the world stage, is that of a musical pioneer. She was the first ever guitarist in China to enter a music school, and became the first to launch an international professional career.

Prodigious musical talent was evident at all stages.

Her first public appearance at the age of ten, at the China International Guitar Festival, received such acclaim that the Spanish Ambassador in China immediately presented her with a concert guitar. The composer Rodrigo attended her debut concert in Madrid when she was fourteen and in 1995, when John Williams came to Beijing, he was so impressed with her playing that he gave two of his own Smallman guitars to her Conservatory especially for Fei and other top students to play.

As the first ever Chinese student to be awarded a full international scholarship to the Royal Academy of Music in London, Fei completed her postgraduate studies with DipRAM, and was also honored with the Principal’s Prize.

As a professional musician, Fei has performed concerts in 40 countries throughout the UK, Europe, Asia and North America.

In 2003 she performed 54 concerts for the “Night of the Proms” Tour, appearing in Belgium, The Netherlands and Germany, to a total audience of over 800,000 people.

Fei has an exclusive international recording contract with EMI Classics.

Fei’s fourth CD of “Bach Concertos” for EMI was released in February 2012. It is Xuefei’s most innovative recording yet. It features her own transcriptions of the music of J.S.Bach – both solo pieces and concertos (recorded with the Elias String Quartet). Xuefei hopes that these will represent a signification contribution to the baroque concerto repertoire for guitar.