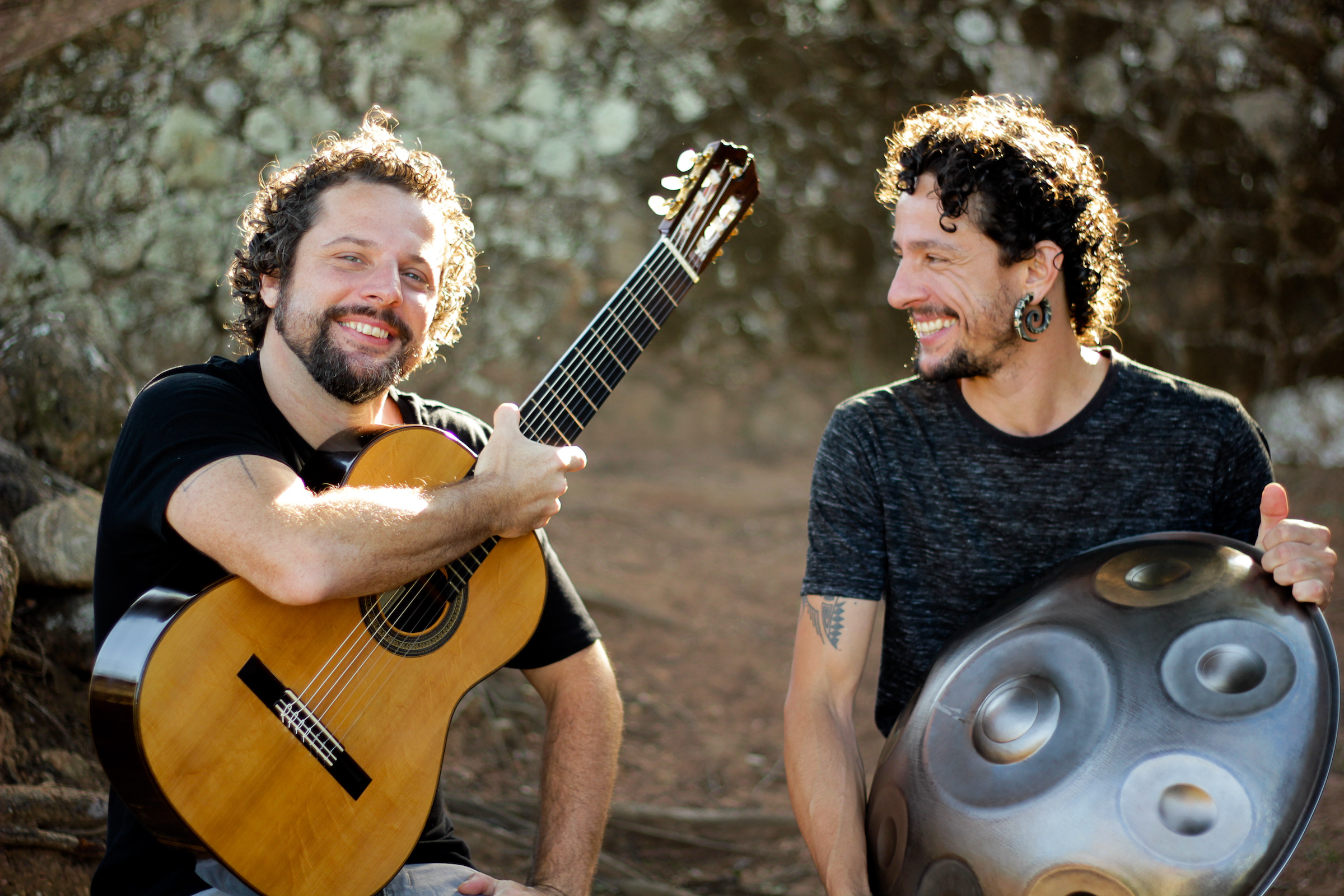 The “Lora Brothers” is a duo formed by Douglas and Alexandre Lora, introducing a unique and universal repertoire, merging the sonority of the seven-string guitar with the mystical resonances of the HandPan. Both GRAMMY-nominated artists with established careers and global touring schedules, the Lora Brothers explore a new musical journey: the outcome of a lifetime partnership that began in their childhood, and is consolidated now as experienced musicians.

The Hand Pan is a family of melodic-percussive instruments made of steel, with a rich body of harmonics and a full spectrum of tone possibilities. The magical combination with the guitar results in a singular and seamless complementarity, presented in a program of original compositions and reinterpretations of Brazilian music.

Composer and guitarist Douglas Lora moves with versatility between classical and popular music and has established himself as one of the most prominent artists of his generation. A member of the Brasil Guitar Duo (with Joao Luiz) for more than fifteen years and seven-string guitarist of the choro and samba band Caraivana, Douglas Lora has a full touring schedule worldwide and has collaborated with artists including Paquito d’Rivera, Marco Pereira, Jovino Santos Neto, Ney Rosauro, Marina Piccinini, and many others.

In 2011 he joined his brother, percussionist Alexandre Lora, and mandolin virtuoso, Dudu Maia, to form an ensemble dedicated to Brazilian traditional music, Trio Brasileiro. Lora has performed as a soloist with the Dallas Symphony, Houston Symphony, Dayton Philharmonic, Orquesta Metropolitana of Sao Paolo, and the Orchestra of the Americas.

Critics and audiences around the world have praised his recordings with the Brasil Guitar Duo, and distinguished artists and chamber ensembles have recorded his compositions. Douglas Lora studied composition and classical guitar at Faculdade de Artes Alcantara Machado in Sao Paolo and received a Master’s Degree in Performance from the University of Miami. Lora was a winner of the Concerts Artists Guild Award in 2006 with the Brasil Guitar Duo and has eight recordings and five original film soundtracks to his credit.

Alexandre Lora moves easily within different styles of Brazilian popular music and World music, performing as a percussionist and Hand Pan/Pantam soloist. Lora received his Bachelor’s degree in Drumset Performance in 2002 from the FAAM (Faculdade de Artes Alcântara Machado). He has studied classical percussion for 3 years at the EMM (Escola Municipal de Música de São Paulo), and obtained his Master’s degree in Musicology and Music Education at the UAB (Universidad Autónoma de Barcelona) in 2009. In 2010 he performed in 33 cities around Spain, participating in the project “DiverSons” (Banco La Caixa). In 2011, as a member of the XLJazz Orchestra, he performed in Amsterdam and Rotterdam along with the great piano player Ramon Valle.

Since 2012, Lora is a faculty member at Centrum Choro Workshop (Port Townsend-USA) and has performed with his Trio Brasileiro in major US cities such as New York, Chicago, Boston, Seattle, Miami, and Portland. Alexandre has collaborated with accomplished musicians such as Anat Cohen, Jovino Santos Neto, Mestrinho, Ramón Valle, Mariana Aydar, and Brazil Guitar Duo.