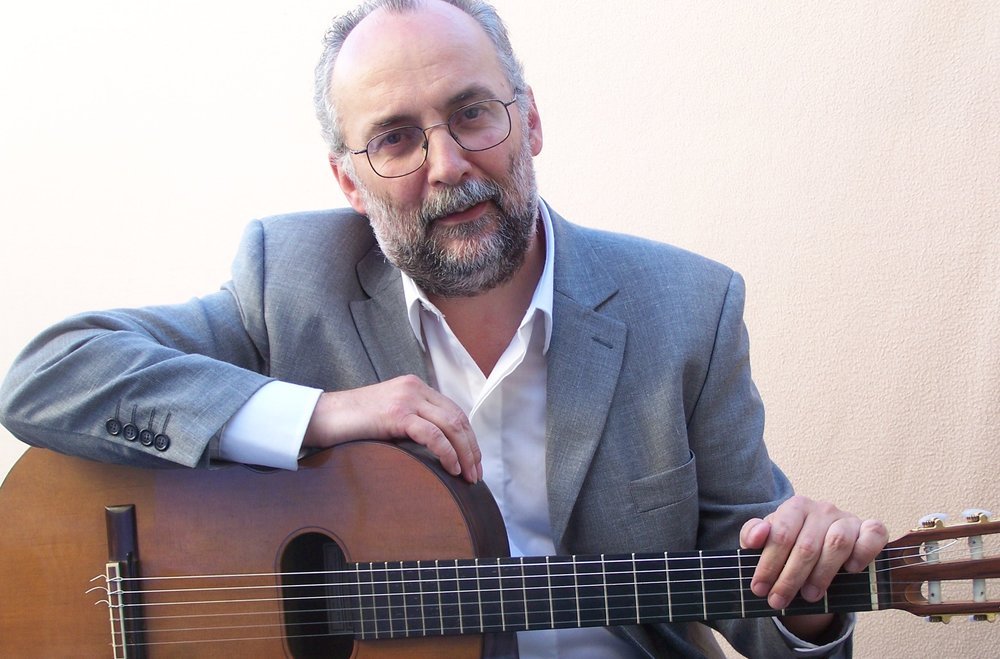 It all started when Máximo discovered a guitar in a closet at his parents’ home in the quiet suburb of Villa Pueyrredon, Buenos Aires, Argentina. It was almost inevitable in a place where tango was constantly floating in the air. The guitar was a memento of his father’s youthful career as a professional tango singer, an activity with which he continued to delight relatives and the patients at his dentistry practice. That discovery, along with his father’s wish to listen to that old guitar again, led the eight-year-old Máximo to take lessons from Don Gaspar Navarro, his father’s patient, neighbor, and friend, as well as a fine tango and milonga player who taught all the children in the neighbourhood. At the tender age of nine Maximo performed at his first concert in nearby Villa Martelli, and a few months later he surprises his mother on her birthday with a zamba of his own composition, written especially for her. The complicity of his father and his mother’s emotional reaction ensured that Máximo and his guitar became inseparable.

These experiences defined Máximo’s musical calling and gave rise to his irrepressible desire to express his personal experiences through his own compositions.

Máximo went on to study with Alfredo Vicente Gascón, which deepened his vocation and led him to participate —alongside his teacher— in a study group led by Abel Carlevaro.

Upon graduating from secondary school, Máximo was faced with the same dilemma as his father had been many years prior: whether to pursue his musical calling or embark on a more traditional career. At first he did both, but after strenuous years of studying mathematics and guitar, the latter won out in the end.

While studying at the Buenos Aires Conservatory of Music “Juan José Castro”, Máximo also took private classes on harmony and composition with Leonídas Arnedo. Those were difficult days for Máximo who, in addition to his heavy study load, was also working every day to earn enough money to survive. Nonetheless, a life in music was, without a doubt, the right choice. One of his first pieces, “Sonatina” — written for a final exam of Morphology at the conservatory — won the first prize in prestigious competitions in Argentina. The composition was also awarded the first prize by a jury that included, among others, Leo Brouwer at the Carrefour Mondial de la Guitare in Martinique.

Máximo honed his skills as a performer by playing tango and milongas at Buenos Aires nightclubs, both as a soloist and as an accompanist. He also played in a number of duos, trios, and quartets, immersing himself fully in every aspect of tango music. His experiences were further enriched by performing at the same shows as well-known tango stars such as José Colángelo, Héctor Stamponi, Horacio Ferrer, Jorge Sobral, Ruben Juárez, Mariquela Monti, Néstor Marconi, and Roberto Goyeneche. At the same time, he studies and analyses the great traditional tango compositors like Juan Carlos Cobián, Osvaldo Pugliese, Julián Plaza, Horacio Salgán and vanguard tango compositors like Astor Piazzolla.

Since his earliest days as a professional musician and composer, Pujol has strived for an ever-closer fusion of traditional Argentine Tango and formal academic concepts. This musical quest on the guitar stems from a thorough, almost obsessive, study of the works of Heitor Villa-Lobos and Leo Brouwer, who revolutionized guitar music by incorporating the instrument and its particular musical vocabulary in their own works.

Today Máximo Diego Pujol’s compositions are performed and recorded throughout the world and studied at Master Classes and Conferences in the most prestigious International Festivals dedicated to his instrument.