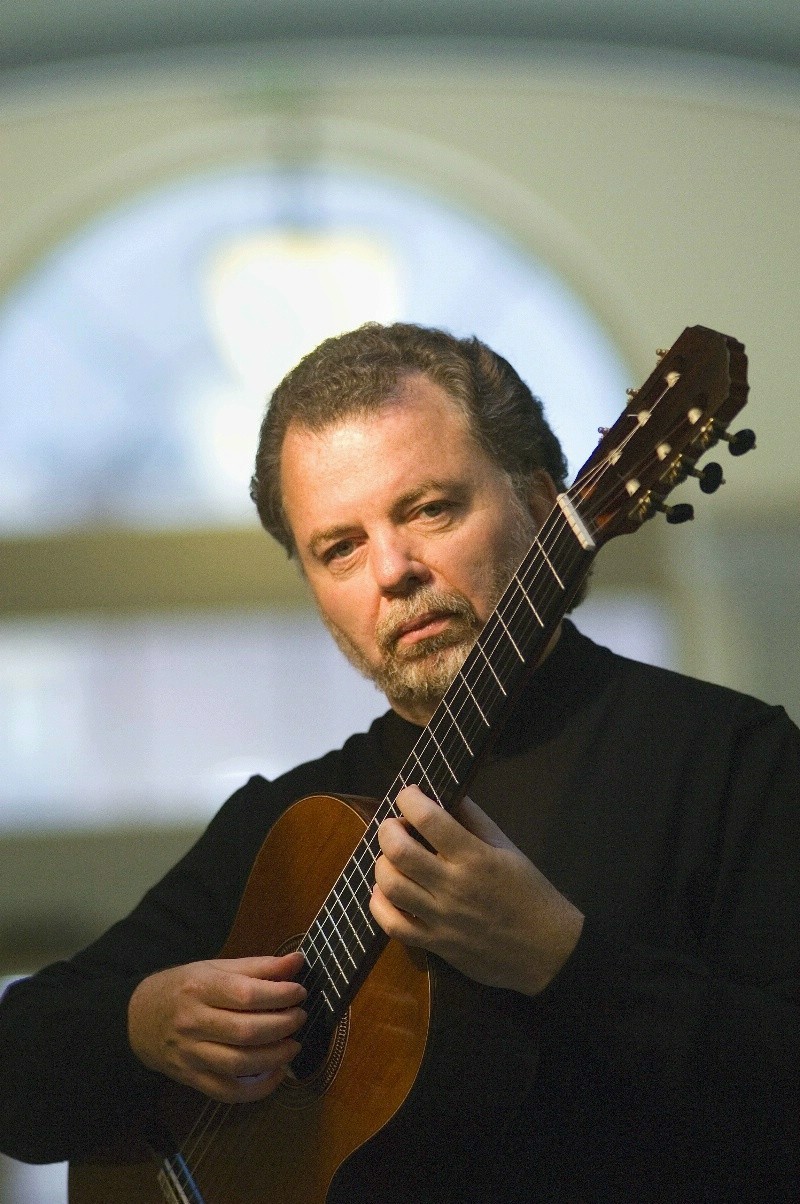 Manuel Barrueco is internationally recognized as one of the most important guitarists of our time. His unique artistry has been continually described as that of a superb instrumentalist and a superior and elegant musician, possessing a seductive sound and uncommon lyrical gifts.

His career has been dedicated to bringing the guitar to the main musical centers of the world. During three decades of concertizing, he has performed across the United Sates from the New World Symphony in Miami to the Seattle Symphony, and from the Hollywood Bowl with the Los Angeles Philharmonic to New York’s Lincoln Center.

He has appeared with such prestigious orchestras as the Philadelphia Orchestra and with the Boston Symphony under the direction of Seiji Ozawa, in the American Premiere of Toru’s Takemitsu’s To the Edge of Dream. In addition, he appears regularly with the Baltimore Symphony Orchestra and with San Francisco Performances.

His international tours have taken him to some of the most important musical centers in the world. Highlights include the Musikverein in Vienna, Concertgebouw in Amsterdam, Royal Albert Hall in London, Philharmonie in Berlin, Teatro Real in Madrid, and Palau de la Musica in Barcelona. In Asia he has completed a dozen tours of Japan and made repeated appearances in Korea, Taiwan, Singapore, China, and Hong Kong. Barrueco’s tours of Latin America have included performances in Mexico, Brazil, Colombia, Costa Rica, Panama and Puerto Rico.

This coming season 2016-2017 includes solo recitals in the United States, Canada, Germany, Spain, and Italy, an appearance with the Puerto Rico Symphony and conductor Max Valdes, performances with the Cuarteto Casals in the United States, and the Beijing Guitar Duo in the United States and Europe. He will continue being an Artist-in-residence for the University of Alicante, Spain. In the 2017-2018 concert season, Mr. Barrueco will offer two solo tours in Europe (November 2017 and March 2018).

Barrueco’s commitment to contemporary music and to the expansion of the guitar repertoire has led him to collaborations with many distinguished composers such as Steven Stucky, Michael Daugherty, Roberto Sierra, Arvo Pärt, Jonathan Leshnoff, Gabriela Lena Frank, Dmitri Yanov-Yanovsky, and Toru Takemitsu, whose last orchestral work Spectral Canticle was a double concerto written specifically for Manuel Barrueco and violinist Frank Peter Zimmerman.

Manuel Barrueco has appeared on a wide array of television programs including “CBS Sunday Morning”, A&E’s “Breakfast with the Arts”, and “Mister Rogers’ Neighborhood” on PBS. He was featured in a Lexus car commercial, and his work in music inspired Michael Lawrence’s biographical documentary: “Manuel Barrueco: A Gift and a Life” which has been aired by PBS stations around the United States. Barrueco’s performances have been broadcast by television stations around the world such as NHK in Japan, Bayerische Rundfunk in Germany, and RTVE in Spain.

Barrueco’s recording catalogue includes over a dozen recordings for the EMI label. His recording of Joaquín Rodrigo’s Concierto de Aranjuez with conductor and tenor Plácido Domingo and the Philharmonia Orchestra was cited as the best recording of that piece in Classic CD Magazine. His Koch Classics release, Concierto Barroco, with the Orquesta Sinfónica de Galicia and conductor Víctor Pablo Pérez, received a Latin Grammy nomination for “Best Classical Recording.” His early recordings, available on VOX, have become a classic amongst guitar recordings.

In 2007 Manuel Barrueco received a Grammy nomination for the “Best Instrumental Soloist Performance” for his Solo Piazzolla, which was the first recording to be released on the exclusive Manuel Barrueco Collection on Tonar Music. Tango Sensations and Sounds of the Americas came out subsequently in collaboration with the Cuarteto Latinoamericano, the latter received a Latin Grammy Award for “Inca Dances” by Gabriela Lena Frank for “Best Classical Contemporary Composition.” Virtuoso Guitar Duos was released in 2009 and includes the most breathtaking guitar duos from the Spanish and Latin-American repertoire. In 2010 he released a solo recording, Tárrega!, which includes works and arrangements of the Spanish composer Francisco Tárrega and which received a Latin Grammy nomination for “Best Classical Album.” His latest release Chaconne–A Baroque Recital came out in 2012.

This past season he released two recordings: Medea, which includes Barrueco’s arrangement of the ballet by flamenco guitarist/composer Manolo Sanlúcar recorded with the Tenerife Symphony Orchestra and Víctor Pablo Pérez conducting, and China West, a recording of guitar trios in collaboration with his protégés, the Beijing Guitar Duo (Meng Su & Yameng Wang).