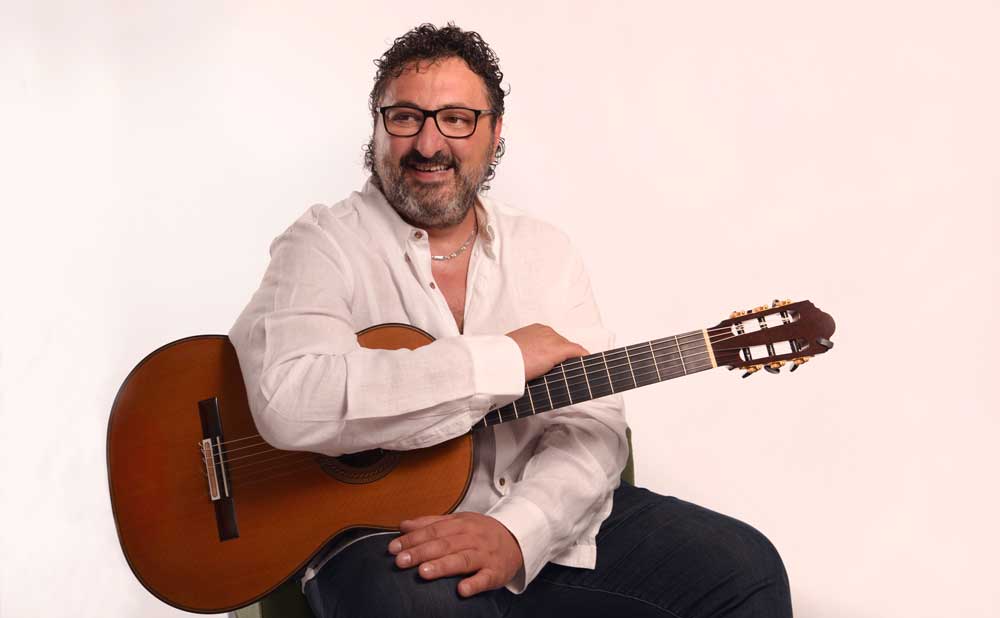 This Concert is part of our International Guitar Competition. More info coming soon.

“…the kind of musician that seems to have disappeared long ago, Aniello Desiderio sweeps away the audience with enthusiasm—as the great virtuosi, Paganini, Regondi or Giuliani of the 19th century did—racing through breath-taking changes of register, acrobatic arpeggios and scales of extraordinary brilliance and elegance like a Ferrari.”

“Actually he knocked me out.”

Unlike other classical guitarists, Aniello Desiderio seems to have it both ways. While his virtuosic abilities are compared to those of Paganini and other nineteenth-century icons, he receives praise from the finest purveyors of twentieth-century music, including celebrated artists Chick Corea and JohnMcLaughlin. And while his classical sensibilities are steeped in centuries of rich tradition, his unique approach makes his music timeless.

Born in Naples, Italy, in 1971, Mr. Desiderio was drawn to the guitar at an early age. He started performing locally at eight years old, and internationally at eighteen, collecting accolades along the way.

His enthusiasm, passion, and charisma quickly caught the attention of the international media. Culture columns far and wide began remarking on his “acrobatic arpeggios and scales of extraordinary brilliance,” likening his elegance to a Ferrari (Stuttgarter Zeitung, Germany), and proclaiming him “the most brilliant talent of the decade,” (Süddeutsche Zeitung, one of Germany’s largest newspapers).

Meanwhile, his stunning musicality was catching the ears of his fellow artists.Pianist Chick Corea was quoted as saying, “[Aniello] knocked me out.” Austrian artist Ernst Fuchs observed “a lightness and a profundity” in Aniello’s music that he’d previously “heard in Beethoven’s music only.” And lauded conductor Lorin Maazel revealed, after hearing Aniello play, “now I know the real sound of guitar.”

Mr. Desiderio has toured and recorded extensively as a solo performer, the featured soloist of renowned orchestras, and with his own ensembles. In 2003, he co-founded the World Guitar Ensemble, which brought together the talents of 10 exceptional classical guitarists. In 2008, together with his brothers Gennaro Desiderio (violin) and Gaetano Desiderio (piano), Aniello founded Quartetto Furioso, a group that ambitiously blends baroque and tango music into a sound as unique as Aniello himself.

Aniello is a professor at S. Giacomantonio University of Music in Cosenza Italy.

This Performance is his Miami Debut.

“Nothing is impossible for Aniello with his instrument.”

“He is very young, but he plays like an angel.”

“In your music there is a lightness and a profundity that I heard only in Beethoven’s music.”