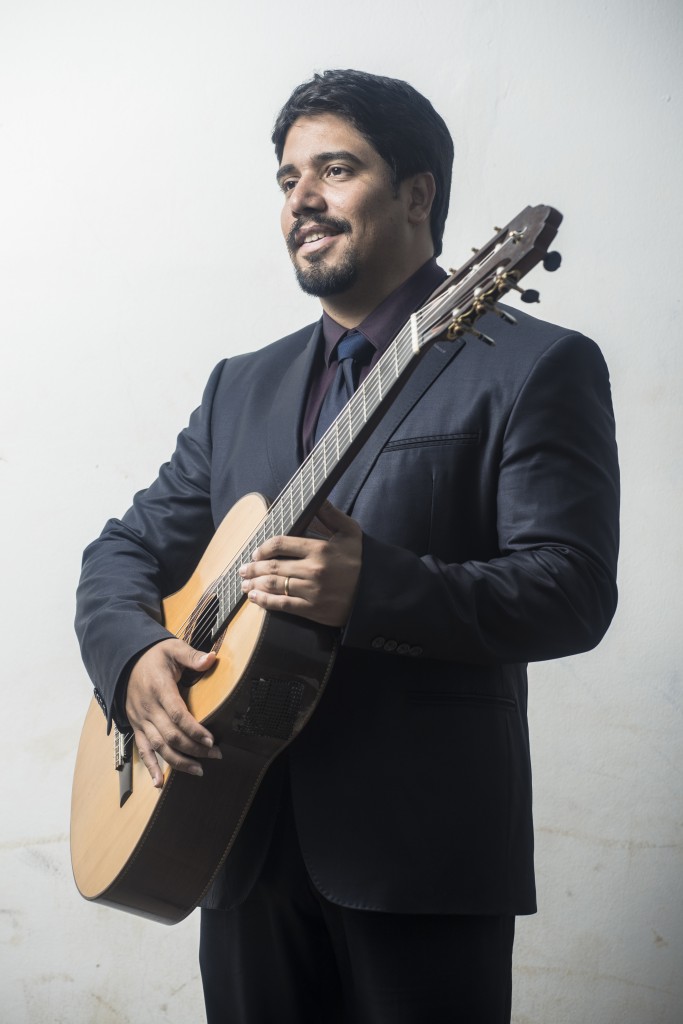 Luís Fabiano Farias Borges holds a Master’s Degree in Music from the University of Brasilia. His musicological research consists of choro studies, focusing on the seven-string guitar. Aside from flamenco techniques, his repertoire ranges from Latin-American pieces to classical guitar, including his own works. In 2002, he received the First Prize as a composer in the IV FEMIB [Brazilian Instrumental Music Festival] and he has been a finalist in other competitions.

Formerly, Borges was a member of the Guitar Orchestra of Brasilia and of several music ensembles. Some of his previous works are: the recording of the first album of the group Malaika; the project Fado Chorado e Choro Fadado with Portuguese Manuel Campos, whose work is a musical confluence between Portuguese fado and Brazilian choro. Currently, he is a board member of Associação Brasiliense de Violão (BRAVIO), a local guitar society which promotes guitar events in Brasília with both Brazilian and foreign musicians. Borges has long performed in Brazil and abroad, with special emphasis on concerts in Galicia (Spain) during the Festival de Pulso y Púa in 2006, 2011, 2012 and 2014; in Lima (Peru) during the international guitar festival organized by ICPNA (Instituto Cultural Peruano NorteAmericano) in 2007 and 2015, and in Cordoba (Argentina), during the event Quinzena Cultural Brasileira in October 2008.Borges also participated in an artist-in-residence program at UCLA (University of California, Los Angeles) in May 2010.

In June 2010, Borges was the youngest person to be honored by the Cervantes Institute in Brasilia, whose award was granted to those who have made significant contributions to Latin American culture. In August 2010, Borges participated in the VIII Festival Internacional de Guitarra – Arequipa, an important guitar event which takes place in Southern Peru. In October 2011, Borges gave concerts and lectures in Spain, Mexico, Cuba and Armenia.

Borges recorded his double album titled Sete Cordas in 2010. In 2012, this album was prenominated for Prêmio da Música Brasileira, the most important award in Brazil. In 2012, Borges was invited to participate in the XI Seminário Vital Medeiros (Suzano, Brazil) and in the VIII FENAVIPI, two important international guitar festivals held in Brazil. Borges has participated in the overture of the 45º Brazilian Movie Festival, playing, with the Orchestra from Brasilia, a work that Patrick de Jongh wrote for the movie A Última Estação.

In 2013, Borges started a new group with Alexandre Gismonti, son of the important composer and multi-instrumentalist Egberto Gismonti. In October 2013 of that year, Borges participated in XIX Guitarras del Mundo, an important guitar festival organized by Argentinean guitarist Juan Falú, which is held nationwide in Argentina annually. During this occasion, his DVD titled Concierto Latinoamericano [Latin American Concert] was released in Argentina.

Borges has been commissioned to write new pieces. In this sense, it is worth mentioning one of his contributions to the project titled Guitarra Latinoamericana (2013), an album released by Spanish classical guitarist Gabriel Estarellas in the U.S (RYCY Productions Inc.). Borges has taken part in the new edition of the project Worldwide Guitar Connections (WGC) by Brazilian guitarist Fabricio Mattos with his work titled Suite Sudamericana in four movements. In December 2013, Borges finished the first part of his guitar work 12 Estudos Nazarethianos para violão, whose pieces are inspired by Ernesto Nazareth (1863-1934), an important Brazilian pianist and composer. Still in 2013, Borges published his work Valsa-Choro in Italy with the prestigious editor Ut Orpheus, whose project called Extra-European Anthology belongs to the series known as Ciao Chitarra!!!

In February 2014, Fabiano Borges participated in the II Encuentro de Guitarra Identidades, a guitar event which gathered important musicians from different countries together in Havana. In the following month, Borges was part of a European tour, playing in Italy, France and Germany, with special emphasis on his concert at Das Internationale Theater Frankfurt. In 2014, Borges contributed to the Acervo Digital do Violão Brasileiro. He continued to play shows in 2014 in different places, especially Cochabamba and Galicia.