I sat down with the Beijing Guitar Duo, Meng Su and Yameng Wang, on a bright Sunday morning following their thrilling performance the night before, at which they gave the Florida Guitar Foundation’s 2013-14 season an auspicious launch. We sat by their hotel pool discussing the weather andhow Miami was treating them thus far. Personally, this turned out to be one of the more surreal, yet somehow stereotypically Miami, 24-hours I’ve experienced in some time: A great Saturday evening concert on the beautiful University of Miami campus followed by drinks at a slick nightspot on Magnificent Mile, and now sitting in the shade of palm trees by a pool, speaking with some of the best guitarists in the world. Their teacher, the great Manuel Barrueco, was also in town from Baltimore and was planning to give them a tour of South Beach later in the afternoon. I ended up tagging along and meeting Mr. Barrueco for the first time. All of this could have easily been intimidating for a mere guitar mortal, but all of them were an absolute delight, immediately friendly and approachable. Offstage, the duo has a very calm, reserved demeanor that belies their great accomplishments as musicians. 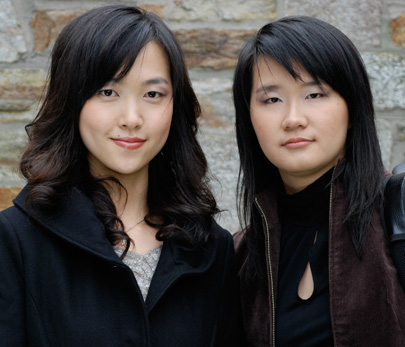 Daniel Shearouse: So, you debuted as a duo, internationally, at Carnegie Hall. Is that correct?

DS: I know, at least for musicians in the United States, that’s like the holy grail of venues. Did you feel that, as someone who has already played internationally, that reputation is deserved?

MS: Yeah, yeah it was definitely a very big deal. We were able to play there because of the Solomon Snyder Award. So, he and the school put this together, at Peabody. And, we’re very honored and it was a great day. I still remember that day.

DS: You both grew up in the same city, right?

DS: Did you know each other as children, when you started playing?

MS: Well, she’s a little bit older than me. So, when I started playing the guitar, we had the same teacher but she already went to Beijing (to study). And I was five and a half, I knew her. It was a big name.

YW: Actually, (when) we first met each other was when you were…

DS: And, how much older are you?

DS: So, you had already won the Tokyo Competition?

(For our readers: Both duo members have won first prize in the Tokyo International Guitar Competition, but Yameng Wang was the youngest winner ever, at age 12.)

Always the goal is to play better, to play more musically.

DS: (To Yameng) What was it like, psychologically, to win such a big competition at such a young age? Were you just happy or did you realize the gravity of it?

YW: Yes, at the time, I felt happy because I was so young. I didn’t realize it was such a big deal. But, at that time I knew that I was doing this the rest of my life.

DS: You had already decided?

DS: Do you think it was at all an advantage that you weren’t fully aware of how big of a deal it was when you were performing? That maybe the pressure wasn’t as obvious to you as it would be for someone who was twenty?

YW: Now, I think yes, that’s a big deal. But, at the time the time, I didn’t feel that. I just felt happy and my parents were happy for me.

DS: I’ve seen a couple of interviews with Xuefei Yang, who has said that when she was learning the guitar that it was not held in very high regard. The guitar was seen as a “not very high class” instrument. Do you feel that that had changed by the time that you were both learning to play? Or did you still feel that?

YW: She’s older than me, so at that period…it [was] not popular. It [was] popular, but classical guitar is not so popular. After I won the competition, I think it got more and more in the schools. The schools have this department and it’s getting better. More students.

DS: With it gaining the popularity that it’s gaining now, what’s the relationship of the classical guitar to some of the more traditional stringed instruments like the pipa? There’s a very similar technique. Is there any overlap? Do the communities have anything in common? Is there any competition?

MS: I think some people get confused when we say we’re guitarists. They would ask, “Oh, so you play pipa?” But, you know, it’s a very similar plucked string instrument. But, the sound is very different. And, after they heard us play, I think they get the impression that it’s not similar. It looks similar, but it does not sound similar. 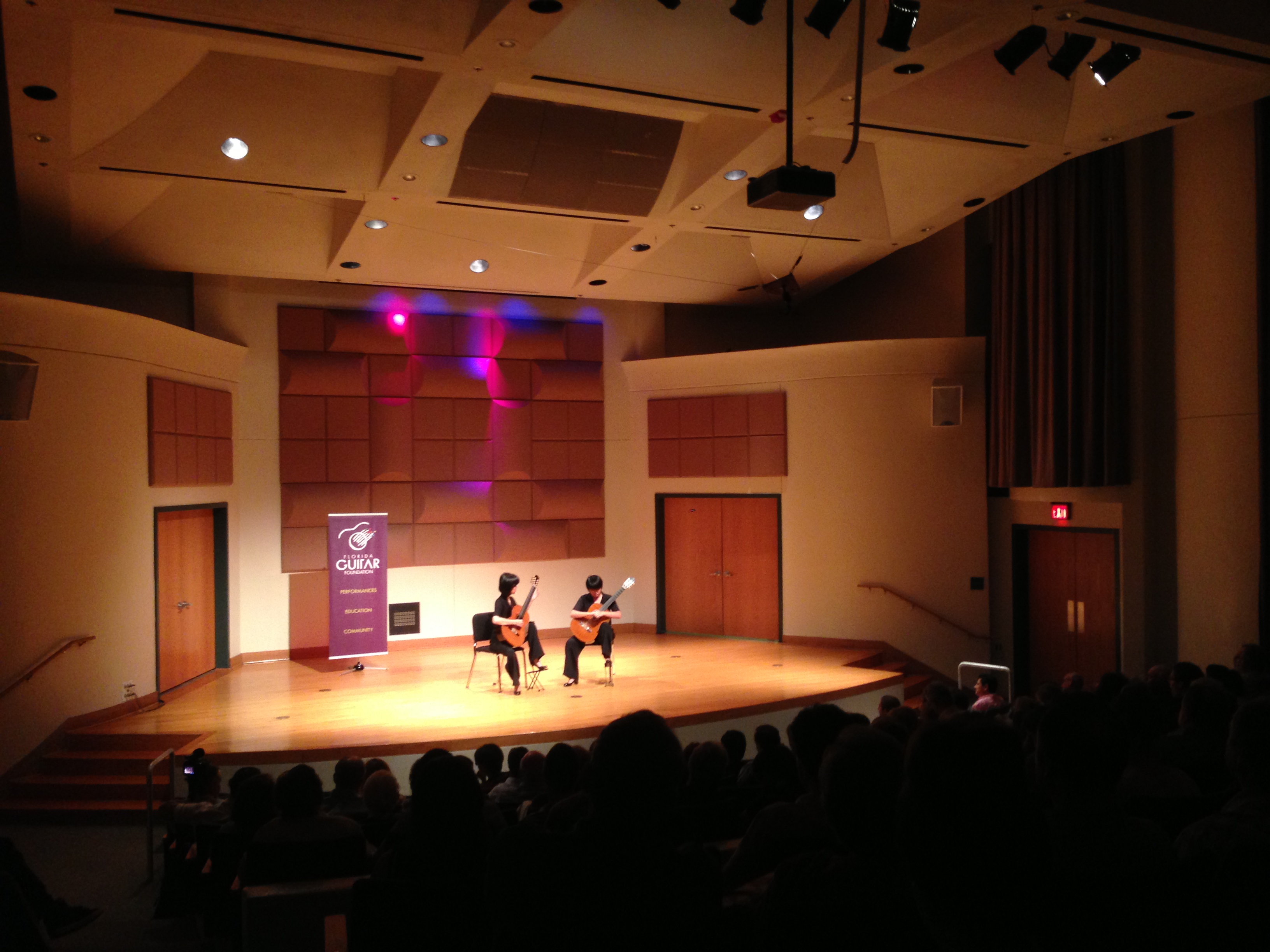 DS: Do you spend much time reading your reviews? Do you check and see what the local journalists have to say? Do you pay attention?

MS: We will pay attention.

DS: Do you take much stock in it? If someone gives you a negative review, how often do you agree with them, or feel like they have a point? Does that even ever happen? (Laughter)

MS: It happened before. We would try to find the reason, if he has a point. Most of the time, we wouldn’t track him down. (Laughter)

DS: Obviously, you’re at a very high level and you get a lot of praise, but is there anything that an audience member, a member of the public, has said to you that has really touched you? That you remember that someone has said after a concert?

YW: There’s one time there was an old guy crying. I think in Cincinnatti? It was an old man…

YW: He was holding our hands.

MS: Yes, I remember he was a violist in the symphony.

YW: He was saying, “People such as you at such a young age can play such beautiful music.”

MS: He was saying from an older generations view.

DS: Right. That you’re still carrying it on and…

DS: What do you do? Do you have hobbies besides music? I’ve met musicians who say, “No, all I do is music!” Do you play video games?

MS: Actually, I play a little bit. (Laughter) I’m a soccer fan. But, that’s all.

DS: (To Yameng) What about you?

YW: Um…, reading? Actually I play (video games) a little bit as well. Not, like her. A different style.

MS: I think you read a lot of Buddhist books.

DS: When you’re on your down time, how much do you practice together? Do you meet every once in a while, or is it a daily thing?

MS: Right now, when we have concerts, we get together three times a week. So, every other day. But if not…we always have something to do. Now we’re going to prepare our next album. So, we need to get some new repertoire. I think, maybe twice a week.

DS: You play a lot of different styles. Is there any style that you prefer or that you’re looking forward to doing on your next album?

MS: Well, the next one will be all encores. Encore pieces, so short, you know. From all kinds of periods.

YW: Including some Chinese.

MS: Yes, so right now we always try to include some Chinese music, especially from piano, transcribed for two guitars.

DS: Like the Tan Dun piece? (The duo played a transcription of Tan Dun’s piano piece Eight Memories in Watercolor during their concert the previous evening)

MS: Yes, well that one was [transcribed] by Manuel Barrueco.We do some little pieces, so short, three minutes or so. And we also like Brazilian music. The encore piece we played last night was Brazilian music.  Also, we’re trying to transcribe the italian concerto by Bach for two guitars. That’s what we’re doing now.

DS: Do you do that together, or do you each take a section and work on it individually? Or…?

MS: Well the first step was to input all the notes into the computer. So, she does that. (Laughter)

YW: Then we will discuss.

MS: She’s very fast. And then we will pick which voices…

YW: And which parts…

DS: I understand that Barrueco was the one who suggested that you form the duo. Had you played together before as a duo? Either performing, or just for fun?

MS: Yes, we used to play duos in our solo concerts. But, now it’s the opposite, we play solos in our duo concerts.

DS: You first met Manuel Barrueco when he was touring in Hong Kong, correct?

DS: Did you already know who he was?

YW: Yes, I [knew] him since I was very little. I listened to every [one] of his CDs.

MS: I think you even practiced with his CDs.

YW: Yes, I used to practice with his CDs. And I remember I played the piece Cataluña. I played with his CDs like [a] million times.

DS: (Laughter) That sounds like some rock guitarists I know.

DS: So, what was that like when you met a hero of yours and he said, “Come study with me.” Was that hard to believe?

MS: It was like a dream. We didn’t know anything. At that time we really wanted to study with him and there were some problems back home. So, we finally got out and, you know, it was like a dream come true.

DS: Obviously, now that you’ve known him for a while your relationship and thoughts about him are probably a little bit different. But, when he says things like you’re the best guitar duo in the world, how does it feel? Does that still have that dream-like quality to it?

MS: Yes. I’m mean we’re very honored to hear him say that. After knowing him for seven years he seems like a very, very nice nice guy. Very nice guy. Even in the lessons, he’s very caring and more into the details. Always trying to make music. Always make us to sing.

DS: If you hadn’t been a musician, what do you think you would have wanted to do?

DS: Can you even imagine it?

YW: I don’t know. I always think that except playing guitar, I wouldn’t do anything! (Laughter)

MS: Me, I don’t know, maybe I will play another instrument.

DS: Do you have any musical goals left that you would still like to accomplish?

MS: Always the goal is to play better, to play more musically. I cannot think of any specific goals.

MS: Hmm… That could take a while.

(Another conference in Chinese)

MS: I think more good repertoire. And, now the guitar is only partially in the music world. A lot of our repertoire is not so good musically. So, if I can do one thing, maybe more accomplished composers that can write for guitarists. And better repertoire.

YW: Yes. In school we had to play a solo recital every year.

YW: We both plan to record solo CDs, also.

DS: One more thing, the sound you have together as a duo…you both have the same guitar, a Dammann, you both have the same strings. Do you think that that creates most of the blending or does it have more to do with shared teachers, or is it something you had to work on? What other factors contribute to that balanced sound?

MS: It’s not quite the same. Mine is thicker, and hers is more on the top. So, that’s why she plays most of the first guitar part. The guitars are different, too. Mine was darker, also in color. That’s why we picked them, because they came in two, at the same time. Actually, we had to literally fight for a better one. That’s why we both wanted the Dammann.