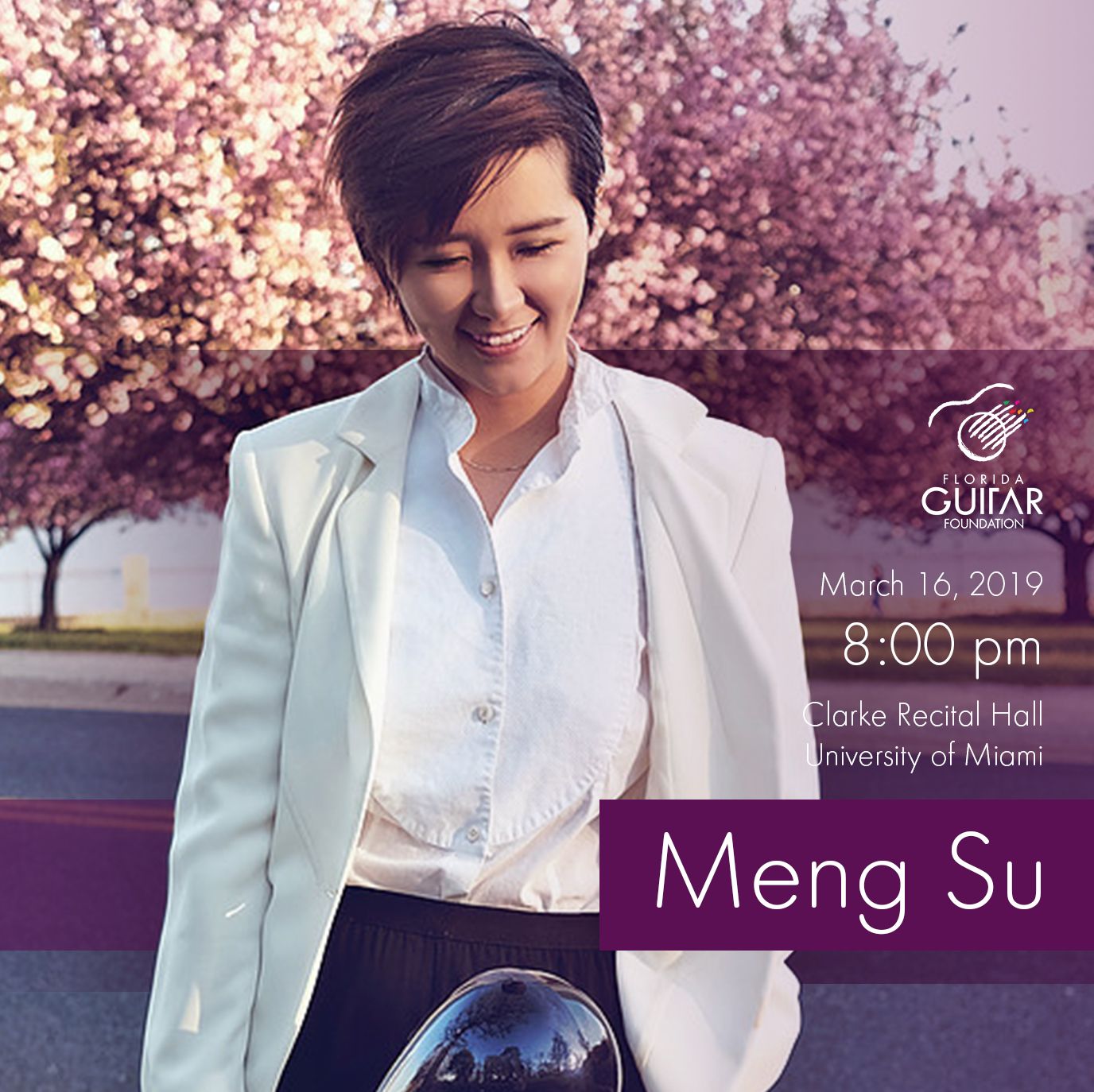 “…having the star potential to serve as inspiration for new generations of guitarists to come.”

Multifaceted guitarist Meng Su is captivating audiences around the world with her stunning virtuosity and refined artistry. New York Concert Review called her performance “seemingly effortless and stunningly polished…. Add to that a beautiful – and fashionable! – stage presence, and she is poised to be in high demand” while Classical Guitar Magazine wrote that “she has already reached the status of a seasoned artist.”

In addition to her busy solo career, Meng Su is an avid chamber musician who tours regularly in the Beijing Guitar Duo and as a soloist with orchestras. This season, Ms. Su will make her solo debut with China Philharmonic Orchestra in the Chinese premiere of Tan Dun’s concerto Yi2; with the Mulhouse Symphony Orchestra in Rodrigo’s Concierto de Aranjuez; and with the Adelaide Symphony with her duo partner Yameng Wang in Rodrigo’s double concerto, Concierto Madrigal.

Meng Su’s performances and recordings have impressed the public with “an ability and artistry that exceeds her years.” (Baltimore Sun) Her debut duo CD “Maracaípe” received a Latin Grammy nomination for the titled piece, which was dedicated to the Duo by renowned guitarist/composer Sergio Assad. Their second CD, “Bach to Tan Dun,” a “must-listen” according to composer Tan Dun, has been widely noted for the world-premiere recording of his “Eight Memories in Watercolor.” A recording in trio, “China West,” with Maestro Barrueco and the Beijing Guitar Duo was released in May 2014 to critical acclaim. Meng Su’s debut solo recording “Meng,” released in 2016 was called “awe-inspiring” and “this year’s finest debut by far” by Classical Guitar Magazine.

Born in Qingdao, China, Meng Su began studying the guitar at the age of 5 and showed her talents from an early age under the guidance of Prof. Chen Zhi at the Central Conservatory in Beijing. Meng Su has won first-prize in numerous international competitions around the world, the last one being in the prestigious Parkening International Guitar competition in 2015. She obtained a Master’s Degree and an Artist Diploma with Maestro Manuel Barrueco at the Peabody Conservatory of the Johns Hopkins University.