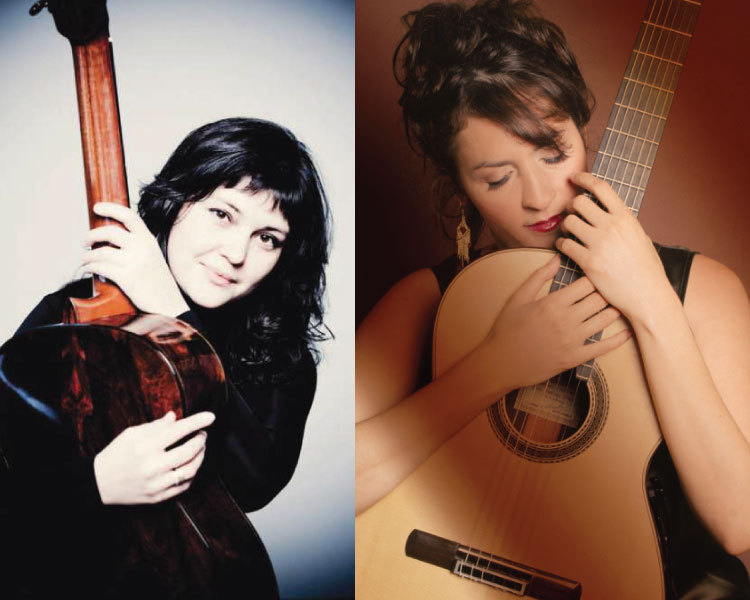 Irina Kulikova tours far afield, with appearances at leading festivals in Europe, North America and Asia and in concert halls such as the Amsterdam Concertgebouw, the Tchaikovsky Hall in Moscow, the Academic Capella in St. Petersburg, Schloss Mirabell in Salzburg, the Palau de la Musica in Valencia, the Musashino Hall in Tokyo and the Oriental Arts Center in Shanghai.

She received over 30 awards for her artistry, including 1st prizes at the highly prestigious competitions of Michele Pittaluga in Italy, Guitarra Alhambra in Spain, Forum Gitarre Wien in Austria and Iserlohn in Germany.

With the rare beauty of her tone and and her enchanting presence on stage, Irina Kulikova catches the hearts of audiences across the globe. She belongs to that class of musicians that profoundly move people with the purity of their performance.

Some of the most sheerly beautiful playing I have ever heard Iliana Matos graduated from the National School of Art in Havana where she studied with José Angel Pérez Puente. She earned a Bachelor of Music (Classical Guitar Performance) from the Superior Institute of Havana (where her teachers included Rey Guerra, Miguel Bonachea and Jesús Ortega), and received a Special Diploma given to the most outstanding graduate for her artistic creative work. She continued her studies with Gabriel Estarellas at the Royal MusicConservatory of Madrid and graduated with a Master of Music Degree from de Extremadura University under Ricardo Gallén. As a student she participated in master classes with Leo Brouwer, David Russell, Sharon Isbin, Costas Cotsiolis, Tania Chagnot, Paolo Paolini, Tomás Müller, Wolfgang Lendle, Carlos Bonell, Juan Carlos Rivera and Joaquín Clerch.Prize winner of eleven major international competitions, including first prizes in the Andrés Segovia in Palma de Mallorca, Luys Milán, and Manuel Ponce International Guitar Competitions. She made history by becoming the first woman to win the prestigious S.A.R. LaInfanta Doña Cristina International Guitar Competition in Madrid, and the only person to win the special prize for Best Interpretation of Spanish Music in two consecutive years, 1995 and 1996.

Her name deserves to go down in guitar history as one of the great players of our time.

Living in Spain for the past 20 years, she has contributed to the development of a new generationof Spanish guitarists while teaching at the Royal Music Conservatory of Madrid, Conservatory ofthe Balearics, and the Conservatory of Salamanca. In addition to this, she regularly gives masterclasses all over the world and has performed extensively throughout Latin American, USA,Europe, Africa, Asia and the Middle East. Currently, Mrs. Matos serves on the faculty atUniversity of Lethbridge Faculty of Arts & Science (Canada) where she is head of guitar studies.