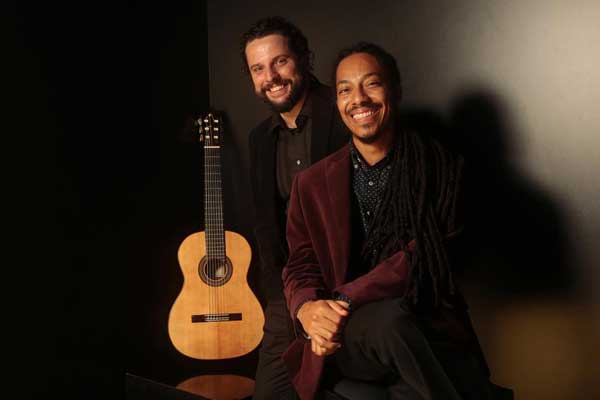 Brasil Guitar Duo, a 2006 winner of the Concert Artists Guild International Competition, and hailed by Classical Guitar magazine for its “maturity of musicianship and technical virtuosity,” is equally at home on a classical or a world-music series. Its innovative programming features a seamless blend of traditional and Brazilian works, resulting in a full global touring schedule and a growing catalogue of critically acclaimed recordings. The Duo has appeared internationally on major concert series and at festivals in Cuba, Germany, England, Canada, South Korea, Colombia, Brazil, Austria, Panama, Poland, and Bermuda. Recent and current U.S. engagements include recitals at venues in New York, Miami, Houston, Dallas/Fort Worth, St. Louis, Tucson, Seattle, Santa Barbara, San Luis Obispo, Nashville, San Jose, and Oakland.

Duo members João Luiz and Douglas Lora met in São Paulo as teenage guitar students and have been performing together for twenty years. The Duo’s principal teacher was Henrique Pinto, and they also worked privately with Fabio Zanon, Paulo Martelli, Sergio Abreu, and Alice Artzt. Douglas Lora earned his Master’s degree from the University of Miami’s Frost School of Music as a student of Dr. Rene Gonzalez. João Luiz received his Master’s degree from Mannes College the New School for Music under Michael Newman, and with sponsorship from the Augustine Guitar Scholarship Fund he earned a doctoral degree from Manhattan School of Music as a student of David Leisner. João is the director of chamber music at CUNY-Hunter College and head of the guitar department at the State University of New York-Purchase.